All District & All State Honors 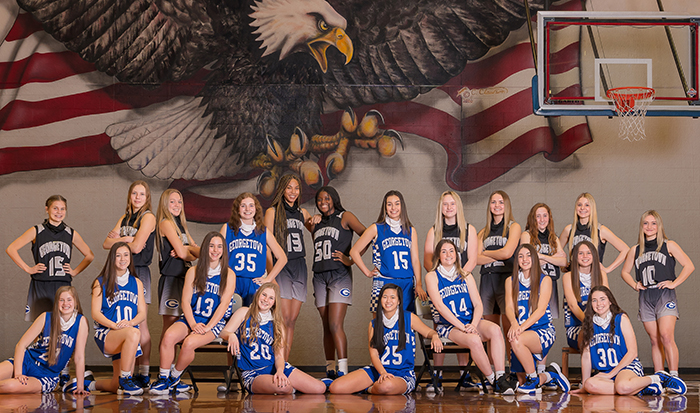 Three Georgetown Lady Eagles have been honored by the Texas Association of Basketball Coaches for their roles in coach Rhonda Farney’s squad’s 26-5 trip to the Region IV-5A championship game. Senior point guard Graci Harris was named to the TABC’s 5A All-State Team and also was listed on the organization’s All-Region IV-5A team with junior teammates Niah Williams, a 6-foot-4 post, and Jacqui Spencer, a 5-9 guard. All three Lady Eagles were first-team All-District 25-5A selections. Harris, a 5-7 three-year starter for the Lady Eagles, who finished second to state champion Cedar Park in 25-5A, also has signed to continue her basketball career to play for John Brown University, a member of the NAIA Sooner Athletic Conference. In addition to the all-state and all-region honors, Harris has been named second-team All-Centex by the Austin American Statesman and selected to compete in the TABC All-Star game May 13 at the Northside ISD’s Paul Taylor Coliseum in San Antonio.

Four Lady Eagles, including Harris, previously were named to the Texas Association of Basketball Coaches 5A Academic All-State team along with senior forwards Megan Herring and Lauren Woodard and senior manager Daniel Cunningham. Three other 25-5A athletes were named to both the TABC’s 5A All-State and All-Region IV-5A teams. The three were mainstays of Cedar Park’s state title squad — junior Shelby Hayes, sophomore Gisella Maul, and senior Alisa Knight. A summary of individual honors earned by members of the 2021 Lady Eagles: