A Perfect Season by the Freshman Blue 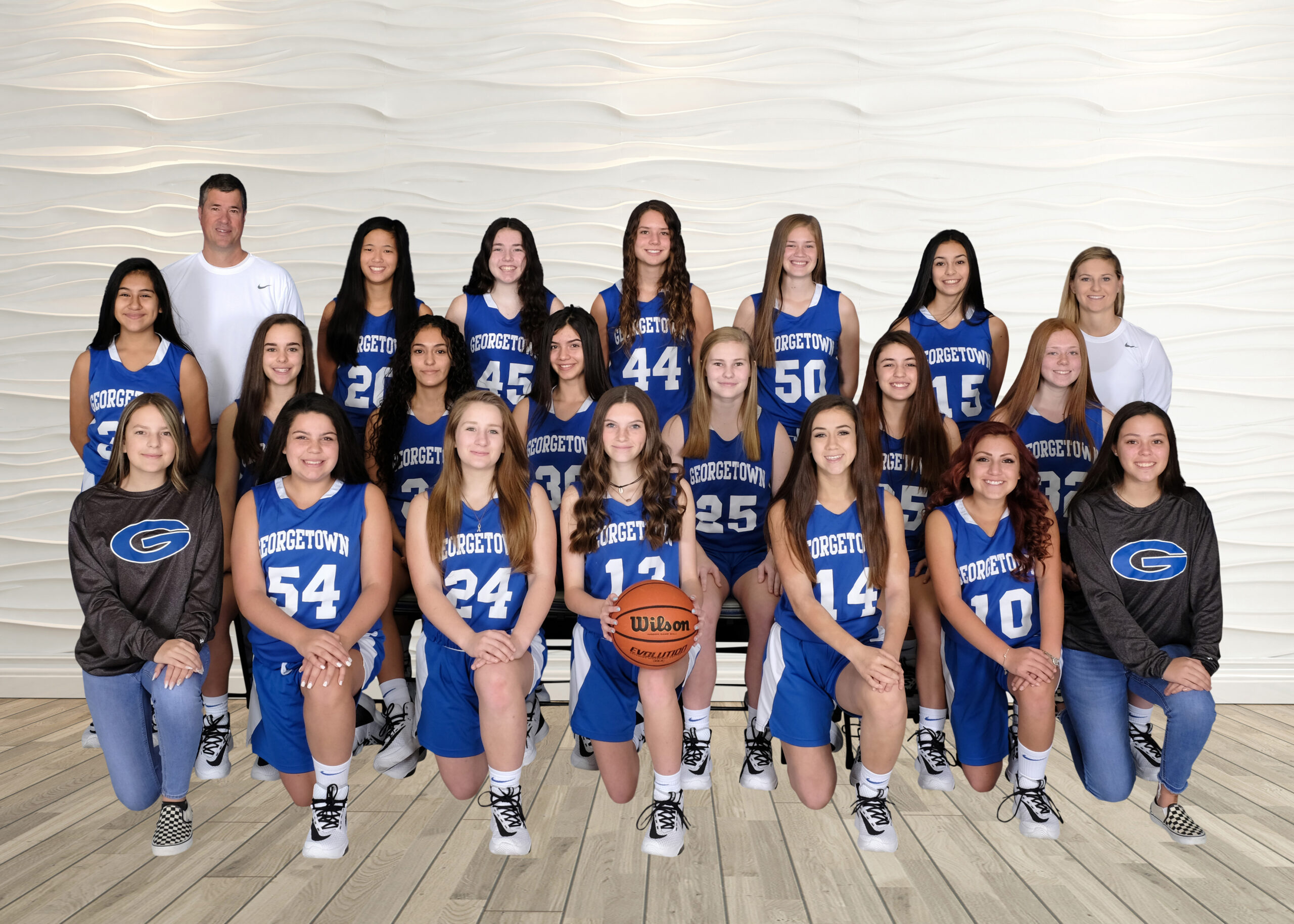 29-0! Exceptional? Dominant? Perfection? or Exceptionally dominant perfection? The combination definition probably fits Georgetown’s Freshman Blue girls basketball team the closest. No losses for the season, an 11-0 run to the District 18-5A championship, 17 victories in which the opponent scored 15 points or less (five in single digits) and only one win by less than 15 points. In fact, in their 27 games determined on the court they outscored the opposition by 933 points — 34.5 points per outing.

“The 9Blue team opened with a win over very talented Cedar Ridge and  Waco Midway teams and never looked back,” Lady Eagle head basketball coach Rhonda Farney said. “I believe they are the only team during the 33 years I have been at Georgetown to ever go undefeated for the season.  That is a tremendous accomplishment for Coach (Katie) Youngblood and her team. “They are very skilled for their ages. The next step for them is to become faster and stronger while continuing to hone their basketball skills.  They play together extremely well.” Youngblood developed deeper into the factors that made her team a very special group that once beat a district rival 71-2.

“My 9Blue Freshman Team finished the season with a record that reflected their hard work and competitiveness,” said Youngblood, who is in her second season on the Georgetown staff. “From day one I set high standards for this group saying, ‘I expect to win and not drop a game that doesn’t impress me, what impresses me is you doing things within our system correctly.” This group bought into the system quickly and started making things happen. “I guess the most impressive thing about this team is that they all contribute and all have a unique aspect about them that adds to the greatness of the group. They don’t have a super star or a go-to player that takes over when all else fails, they truly win as a team. “It is hard to stay disciplined and be coachable when you’re beating teams pretty easily every time you step on the court but we kept setting goals and standards for both ends of the court and these ladies stuck with the system. Obviously, this is only my second year coaching but this group is very special, from the players to the parents to their win/loss record. I do believe that the Lady Eagle program has a bright future with this group over the next couple of years.”

It’s time for the players — Ainsley Pelzcar, Madelyne Furr, Taylor Meyners, Jane Butler, Erica Ramthun, Natalie Rivera, Avery Lopez and Amiya Gonzalez  — to take a bow along with Abby Brent, who, at times, played for both the Freshman Blue and Freshman White. The inside combination of Pelczar and Furr led or shared the scoring lead in 21 games. Pelczar had the high individual game of 24 points in a 60-13 win over Kyle Lehman. Looking at the team’s progress, Furr said, “As we went through our season, we gained more trust towards each other, which led us to be confident that our teammates would make the right play. We practiced hard and we got better each time we practiced.” “The best thing about having an undefeated season was seeing the work we put in payoff,” added Butler. “We were able to see our progress each game. It feels good winning all your games with your team.” Gonzalez characterized the season in the following manner: “I feel we learned so much from each other with the guidance of some of the best coaches. Our team was comprised of amazing Lady Eagles. Our team worked hard, learned to trust and depend on each other.”  Ramthun and Pelzcar responded to the philosophical side of the Lady Eagles’ experience. “Being a Lady Eagle is giving a 100 percent, all-out effort and never giving up. you strive for the best and work together with your teammates to succeed,” Ramthun said. As for the program’s EFND mantra (Eagle Fight Never Dies), Pelczar said, “To me, EFND means to never give up. We always have to stay together as a team and lift each other up.” Ah, the memories of a first and highly successful high school season were on the minds of Meyners and Lopez. “My team and I have so many memories from on and off the court, but one of my favorite memories from on the court was in our second tournament,” Meyners said. “We had a game at 8 o’clock, or somewhere around there in the morning and we were supposed to play Weiss. “The whole game, we were neck and neck with Weiss. There was about four minutes left in the fourth quarter and we were up by four, when I heard the whistle blow and we all looked over at the table to see coach “Blood” yelling at them. They stop the game and walk over to the bench to see what’s going on. Then all of us hear coach Blood yell, ‘wait,wait this is my freshman team and their JV team. I know we’re winning but still this isn’t right . . .!?” At this point we all knew something was wrong with the bracket so we just laughed it off.” “My most fun memory off the court was when we had our team Christmas Party,” Lopez said. “It was great getting to spend time with my teammates and have fun off the court. It only took us about 100 times to get all of us jumping at the same time for a team photo.”

“I was very pleased with the schedule that coach Corey Cunningham was able to put together for our 9White team,” Farney said. “The team literally played small-school varsity players at times.  They took on all-comers! The team played some very hard competition and got better during the course of the season.”The White posted an 8-9 record with a group of Natalie Floriano, Reagan Nelson, Elleigh McKinley, Danielle Rodriguez, Payton Humphrey, Lourdes Ramos, Sarah Herrera and Brent.

** — denotes flex player who played on both Blue and White teams