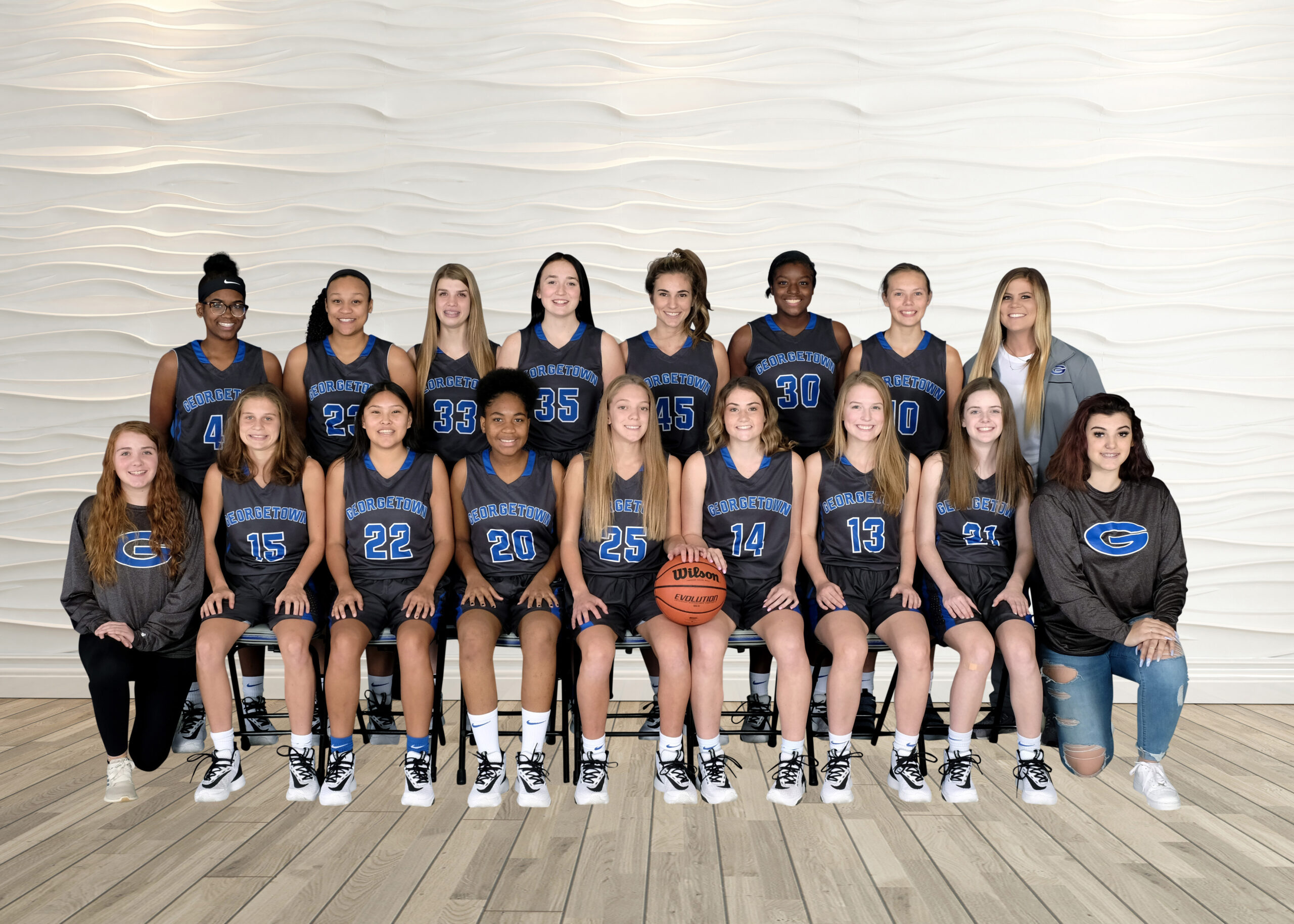 Georgetown Lady Eagles junior varsity basketball coach Tosha Doherty does a good job of defining the dynamics of constructing a JV team designed to produce a consistent line of talent — both physically and mentally — to keep the varsity productive on an elevated level. She had an ideal season to reflect on this process. After losing their first four games — three of which were against teams from strong programs — the Lady Eagles won 21 of their final 23 games, including a dominating  11-0 championship march through District 18-5A. In fact, in two seasons in the suburban Austin area district, the GHS JV has constructed a combined 23-0 record. Only a weather cancellation this season with Bastrop Cedar Creek on Jan. 10, kept the Lady Eagles from a pair of perfect dozens in 18-5A.

“The JV team is always going to be a team that can be challenging,” said Doherty in her second season on the GHS staff. “It molds different types of athletes by bringing freshman up to sophomores and continuing to mold sophomores and juniors for the varsity team. This produces a team with all different mindsets that we have to mold together. “The JV team struggled at first and had to work out its kinks. After figuring out how each other worked best we ended the season 21-6 and undefeated in district. We had great parent support, and I am proud of the athletes’ growth throughout the season. This makes me excited for what is to come in the future.” Veteran head coach Rhonda Farney, who has taken the Lady Eagles to the playoffs in 30 consecutive seasons, seconds Doherty’s analysis and is very happy with the outcome. “Our JV took a few lumps early as they learned to play together,” Farney said. “We had hold-over players from the JV, varsity flex players, 9th Blue and 9th White players as well as a true freshman player figuring things out.  As the season progressed, the team meshed and Coach Doherty led them to an undefeated district championship. I am very proud of their accomplishments as a team.”

The Lady Eagles’ six losses were to 6A opponents — Vista Ridge twice, Round Rock Cedar Ridge, Waco Midway, Copperas Cove and Allen — but down the stretch in their final 13 games they dominated, winning every game by at least 22 points. In district, GHS posted an almost-unbelievable winning margin of 62.9 points to 13.4 points a game. They held the opposition in six 18-5A games to single-digit totals, including an 81-2 victory at Cedar Creek. That final stretch included a 23-point win over 6A power Austin Westlake.

The JV roster included forward Megan Herring and Jordyn Stout, a pair of juniors who were listed on both the varsity and JV rosters; sophomore guard Jacqui Spencer, who was moved up to the varsity at the end of the season and was inserted in the primary backcourt rotation; graduates of last season’s strong freshman team such as post Shelia Lee along with fellow front-line sophomores Morgan Larson and Lauren Cavanaugh along with junior post Vyctoria Lehr, freshman guard Brooke White and junior guard Tanaya Smith. Sophomore Brielle Maxwell was a  key member of the team most of the season, but left the squad late in the campaign to concentrate on volleyball.

A successful player-development factor was very important this season with four of the five varsity starters and two reserves set to graduate in the spring.  Point guard Graci Harris will be the only returning regular next season as the Lady Eagles and cross-toll-road-rival East View will move to a much-tougher district with Cedar Park, Leander, Leander Rouse, Leander Glenn, Marble Falls and Liberty Hill.

Let’s take a look at several aspects of the season through eyes of several key players:

How did the team improve? “My team improved both on and off the court,” Shelia Lee said. “At the beginning we were fast, now we are faster, better shooters and better listeners. Not only did we improve as a team but we all did individually.”

What is your most favorite memory from on the court?

“When I have the opportunity to play outside and get to drive and kick the ball to Jordyn Stout,” answered Megan Herring, who led or shared the scoring lead in 13 games for the JV along with logging time on the varsity.

What does EFND mean to you?

“EFND means to never give up and always give your hardest no matter what,” explained Jordyn Stout, a proven 3-point-shooter who also saw varsity action.

What was your most fun memory off the court?

“My favorite memory off the court was when Morgan (Larson) and I came up to the school to shoot and there was an Indian Festival going on whenever we showed up,” said Sam Folsom, who appears to sprint up court with the dribble offensively and comes up consistently with the ball on defense.

In summary, left-handed guard Jacqui Spencer, who scored a team season high of 25 points in a 75-5 win over Elgin, said:  “I characterize the season as overcoming obstacles because we had a rough start. We had many new faces, but it was a challenge that together as a team we could overcome. Once we overcame our challenges, we came together and played as one which led to our huge success as the season progressed.”